After years of wanting to do so, I just had delivered 13 head of livestock to our farm near Lexington, Virginia. I¹ve been so acquainted with grass fed beef for many decades and that’s the only kind of beef we eat. I decided it was time to get started on building topsoil and practicing what I preach and eat. While we don¹t eat that much beef, for over 20 years we have bought our chicken, pork and some beef from Joel Salatin at Polyface Farm. Starting next year, if all goes well, it will be only chicken and pork. More recently we have purchased beef from Wheatland’s Farm. And today our livestock came from that very farm. They were born there, they’re clean, and have never had anything but grass and natural vitamin supplements. No growth hormones, pesticides, or grain! 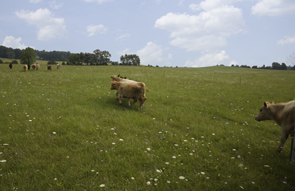 After spending the last 48 hours consumed by a friend’s surgery, we got an unexpected and early message that the truck and trailer were on their way with the cattle. They would arrive in an hour or so. Talk about waking from deep slumber to that news! The water wasn’t completely hooked up, yet. The 20-acre field, which I fenced with electric wire several weeks ago, needed fencing on the 1st strip of area for grazing. But, by the time they drove in, I was ready except for filling the 100-gallon water tank.

7 steers and 6 heifers, averaging just over 600 lbs., jumped off the trailer into their new pasture. They immediately bunched up and walked the entire perimeter to check out their new surroundings. They calmly looked for shade and tasted the new varieties of grass this field had to offer. They seemed happy but I know the soil and grass species must and will get better. Hay has been made on this farm for 15 years. Before that, and before our ownership, our farm was overgrazed and abused. This hay making and overgrazing takes nutrients out of the soil because no organic matter, like manure or decaying grass, goes back into the soil. However, these cattle will make their own fertilizer and organic matter by eating the grass and moving on … much like their wild buffalo cousins. They eat the optimum quality of grass, leave their droppings behind, and before the grass is stressed, the cows are moved on to the next swath of fresh grass. This is what Salatin calls ‘Salad Bar Beef.’ Flies tend to congregate near the manure, so in large part the flies are left behind when the cattle are moved to a new area and the cattle are not standing amongst their droppings all the time.

After a late breakfast, Michael (who sold me the cattle) and I set out to situate the water so the cattle could drink at will. While we got that system in place, his young Border Collie and our Australian Shepard mix got into the cows, panicking 6 of them enough to send them crashing through the fence to escape the dog. His dog is trained for such things: like putting the cattle where they are supposed to be. The Border Collie came back to his boss right away. Our daughter’s big 95 lb. Shepard, however, felt his instincts and chased them over, under, and through the electric fence. He then ran them out of the 20-acre field into a much larger hayfield. Normally attentive to commands, this dog temporarily lost his sense of hearing and simply heeded his call of the wild. He finally became aware of my presence and got his rear-end back to the house. Meanwhile, Michael’s dog expertly brought the cattle back, through a small gate, to join the rest of their small herd. Now, these 9-month-old bovines are out in their pasture munching away on grass that has not been grazed by anything other than deer for 15 years.

I sent Michael a thank you email for the cattle and for all his help and support. I urged him to treat his dog to a little grass fed burger or tenderloin for a job well done. Our dog was to get dry food, unless I moistened it in an unusual fashion. He’s in the doghouse (on our kitchen floor). Michael wrote back encouraging me in this new venture and suggested that our dog may have found a new career as a housedog.

By next summer or fall we will not only be supporting the locally grown food movement, we will be contributing to it by selling beef to friends and neighbors who are concerned about their source of food.

If you are interested in buying local foods, please look under ‘Resources’ on our Web site for local farmer’s markets and local farms. 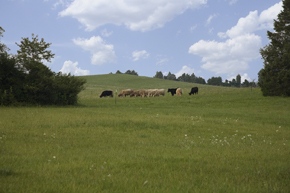