My first showing came a while after I finished my course work and passed my state Real Estate license exam. It also came after numerous tutorials by my first broker. He had never had an agent before. Or if he had, they were no longer with him. I never asked. He was independent and put first things first. One of those first things, I found out, was to go fishing on the James River. He liked to fish. I was expecting to come 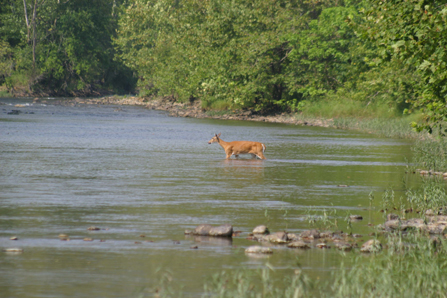 to work and impress him with my diligence and capacity to learn the intricacies of land and farm sales and to become the best Realtor. That was all well and good but the first, and many subsequent, lessons came during or traveling to and from the river.

I liked to fish, too. But I never imagined answering my wife as to how my day went at work, that I had gone fishing.  She was incredulous but I had to do what my broker required. I didn’t want to lose my first job in Real Estate. This was important training, I realized. He had an island on the James and we even stayed overnight several times in his very rustic cabin. Few times have I slept better than to have the night sounds of the mountains and flowing water act as a lullaby! Later in the Fall, when my wife hoped the fishing would end and the income begin, he helped me get my first turkey while we hunted the same island. If this was slaving away at the office, then I might be willing to put in overtime 7 days a week. I was putting food on the table…it just wasn’t in the norm of a paycheck.

Back to my first showing and the lessons of real estate. We received a call to see property from a gruff Richmond businessman. He had seen an ad about a wooded hilltop parcel with magnificent views. While my broker leaned against the doorframe and watched, I prepared to meet the prospective buyer by collecting maps, deeds, and surveys. I was ready to make my first showing a success! Several days later, I met the fellow at our little office. We piled into my jeep to see the countryside: he in his nice suit and wingtips, me in my khakis, flannel shirt, and hiking boots.

He liked cigars (whether lit or not). His full frame didn’t like seatbelts. He liked to talk. He did not like to listen. Nonetheless, I navigated successfully to the property where we parked and set out to explore on foot. I don’t think he intended to do any walking but my promise of the top and a view encouraged him to come along with me. I pointed out the big trees, the deer trails, and the gentle terrain. As I led the way, slowing to help him keep up, I found a shed antler from the previous year. It was beautiful; with the sculptured gnaw marks of mice and squirrels looking for nutrients. What a powerful sign befitting a lovely property! He was not impressed with the left behinds of deer.

We made it to the top where the view of the Blue Ridge Mountains spread out in all directions. This magnificent scene would soften the heart and mood of anybody! I turned expectantly to see his expression as the vista, in all its grandeur, opened before him. Replying to my exclamation of the view before us, he paused, shifted his unlit cigar from one side of his mouth to the other, caught a breath and said: “If the damn mountains weren’t in the way, you could see forever!”  With that, he turned around and headed for the car. The thought of using the sales technique of “overcoming objections” did not apply; in fact, it did not enter my mind.

This was an important lesson in many respects, one of which was that some sales are best not happening. As I watched him ply his way down the trail, unlike any sidewalk he had ever encountered, I thought of my uncle saying to me: “Son, you can tell a city boy, but, you can’t tell him much!” It was that experience that bolstered my belief and concern that not all people know or care to know about the natural world we live in. I was, and still am, very happy that he had a place he wanted to go back to.

Income my first year was $800.00. That’s $800.00 more than my wife thought I would make. I’m glad she had patience and a teaching job! I still have that antler from my first showing and I regularly sell millions of dollars worth of real estate. My wife doesn’t teach in school anymore. She’s now a broker in our firm and was just elected to be President of the Lexington Buena Vista Rockbridge Board of Realtors. And, I haven’t even taken her out for real estate lessons on the river. We do, however, fish occasionally on the James, the Maury, the Jackson, the Cowpasture, the Calfpasture, and the Bullpasture rivers. If income dries up, we’ll fish!